Researching bacteriophages at the Erasmus MC

Bacteriophages, or phages for short, are viruses that only infect bacteria. So, they are harmless for us humans. Phages are found everywhere on Earth; in the water, soil, inside our bodies and even on our skin! Basically, wherever bacteria are present, there are phages as well. It is estimated that on Earth there are more phages than all other organisms, including bacteria, people and animals combined!

Phages are specialized in killing bacteria. There are many different kinds of phages, all with different shapes, sizes, properties and their own favorite bacteria to infect, which makes them very specific. When a phage infects a bacterium, it injects its genomic material and tricks the bacterium into making new phages. When millions of new phages are made, the bacterium will eventually burst and die, releasing new phages into the surroundings that are ready to find new bacteria to infect. 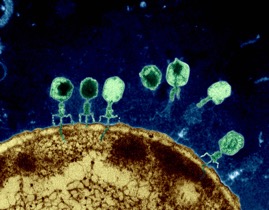 Even though phages have been on this planet for billions of years, they only recently came to our attention. Currently all bacterial infections are treated with antibiotics, however a lot of bacteria have found many ways to resist antibiotics. Infections by resistant bacteria are often very hard to treat or even untreatable! This is why scientists are searching for other ways to kill these bacteria. Because phages are specialized bacteria-killers and do not infect human cells, we think that phages might be the perfect solution to this problem! Of course, more research will need to be done first, to really prove phages can be used as an alternative therapy against bacterial infections.

Next to this, we also want to see if phages can help us tackle other issues. For example, we can use phages in research as decoys for other harmful viruses that we can find in our water, such as norovirus or hepatitis E. These harmful viruses can cause diarrhea and other complicated infections. Someone infected with norovirus can release high amounts of these viruses in their feces and these viruses can end up in the sewage, which if not treated efficiently will lead to the release and circulation of these viruses in surface water.

This is just the first step of using phages as our human friendly virus savior.

If you want to learn more about phages, check out this fun video!